Meet our Board of Directors

Resident Artist
Carol was born and raised in Rhode Island where she received a BA in Psychology from Rhode Island
College. After 8 years as a Vocational Counselor for young adults, she changed her path and started
working on and around wooden boats at her father-in-law’s boat yard, becoming a yacht refinisher and
eventually earning her USCG 50 ton Captains license. During this time Carol and husband Bob built their
37’ sailboat STAR CRUISER that was their home for 25 years.
In 1987 Carol and Bob began working as a sales and marketing team at boat shows for what is now
Maptech, producers of marine navigational charts, guides and software. This position allowed them the
flexibility to take their boat down the Intra Coastal Waterway and eventually to Vero Beach where they
stopped to visit family. Since then, they have called Vero home, using it as their base while working and
sailing in The Bahamas.
Traveling and experiencing different cultures has always been a passion and in 1999 Carol and Bob set
off on an extended sailing trip that would eventually take them around the world. During the trip they
collected local art and craft pieces with a particular interest in handcrafted pottery and textiles.
Carol came to pottery in 2011 when her sister, Coco Martin, encouraged her to take a Raku class with
Sean Clinton at the Vero Beach Art Museum. The entire process was new and exciting and she was
hooked. Life commitments limited time in a studio, but she found time to take classes with Glenda
Taylor, Walford Campbell and Maria Sparsis to improve her skills. In 2018 she joined Indian River Clay
and eventually altered her work schedule to allow more time for playing with clay. Carol has been a
member and strong supporter of Indian River Clay. She became a Resident Artist in 2021. 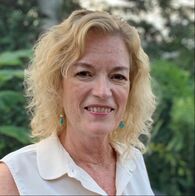 Member Artist
Cheryl moved to Vero Beach two years ago after living and working in the Philadelphia area, where she
raised her children. As a journalist, technical writer, and freelance marketing writer for high-tech
companies around the world, she has spent her career making a living with words. But she’s always
loved the creative outlet – and relaxation – of working with clay. (Much cheaper than therapy!) Cheryl
was a member of two small studios in Pennsylvania for about 20 years, studying with local artists,
attending occasional workshops, and participating in a local potters’ group. She looks forward to helping
the Indian River Clay community grow and supporting our members and students in their own creative
journeys. 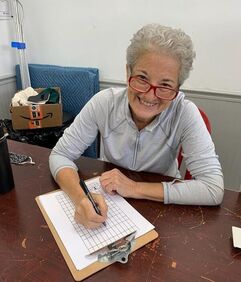 Co-Founder & Charter Member
Susan grew up on Long Island in those idealistic 1950’s, one of six children. After brief stints as a kindergarten teacher, human resources professional and stay-at-home Mom, she obtained her MBA at NYU. Susan joined KPMG and earned her CPA, then joined DCH Auto Group, a small New York City family owned business.  After 30 years, she retired as Vice Chairman of DCH which had grown to be one of the retail auto industry’s largest companies encompassing 40+ subsidiaries in multiple states.
Susan’s work fueled her genetic passion to travel and you may have seen her wandering a food market or seeking pottery souvenirs. She does still think of herself as a New Yorker, and her only child, Jenna, lives in southern California, but her mother and other family are here, so Florida became home.
Restless and wanting to find community here, Susan began to play in clay in 2016 with Ginny Piech Street as her first instructor. Further encouragement from her neighbor Katie Santomartino led her to classes with Maria Sparsis. She never dreamed that path would lead her to Indian River Clay but here she is, a novice encouraging the right side of her brain amongst new friends. Susan hopes that the welcoming atmosphere at Indian River Clay will open others to this joy. 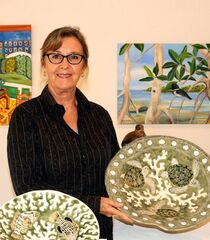 After receiving her BFA in Ceramics at University of Florida, Glenda Taylor began her thirty year journey into clay. She is a fourth generation Floridian, and lives full time in Vero Beach. Glenda is a founding member of Tiger Lily Studio and Gallery and has been featured on the cover of the country’s most prestigious ceramics magazine, Ceramics Monthly. She has also received recognition in Southern Living Magazine. Glenda has exhibited in over thirty group shows, and her work is included in many distinguished collections, including the White House. She has taught ceramics at the Vero Beach Museum of Art and has been an active supporter of the pottery community. She is well known and a greatly respected member of our local community. 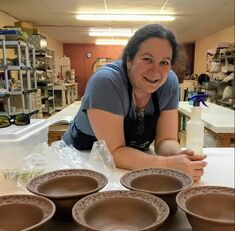 Founder & Charter Member
Indian River Clay Co-Founder, Board Chair and Resident Artist, Maria Sparsis was born on the island of Cyprus to a Cypriot father and a British mother, Maria has also lived and worked in Wales, Scotland, New England and, for the last 18 years, Florida. A Marine Biologist by training and a scientist by inclination, Maria has a deep commitment to nature in all its forms. She is part owner of Tea and Chi, a premium loose-leaf tea company in downtown Vero Beach, a resident artist and former owner at Flametree Gallery and serves as an adjunct biology professor at Indian River State College. Maria has studied ceramics with Sean Clinton, Nancy Blair, Glenda Taylor, Charlie Riggs, Deborah Adornato, Walford Campbell and Nan Jacobson. She provides many essentials to the IRC Board from engineering tasks to marketing to one of IRC’s most frequent instructors, Maria has made the success of IRC her first and foremost passion and this drive comes through in all she does. 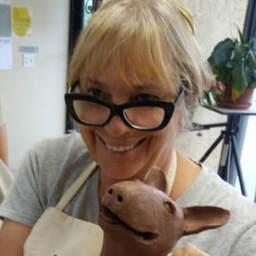 Co-Founder
Joan Cortright has worked in art and ceramics in particular, for over 30 years. In 1996 she rented a studio at the Ceramic League of Miami and during her 15 years there she served on the Board of Directors, was employed as the school director, and taught many years of classes and summer camp. After moving to Vero Beach in 2012 she taught classes for several years at the Vero Beach Museum of Art and out of her own studio. 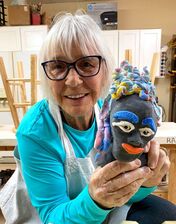 Resident Artist
Linda is one of Indian River Clay’s first full-time members. She was born in Palm Beach, Florida and although life took her on various roads from Key West to Idaho, she is now a permanent Vero Beach resident. Having been both self-employed and a founder of non-profit endeavors, Linda is an astute business woman. Her Earth Dream Alliance saved a cloud forest in Ecuador from slash and burn deforestation. She found her way to clay after retirement and loves the challenges and the people that clay has brought to her life.  Linda has worked at two previous studios (Boulder Mountain and Renegade Clay) and brings that experience to IRC. She is a life-long student and has probably participated in more clay classes than any other person. She clearly has a very strong vested interest in the success of IRC and tells us that “Indian River Clay is home to me".

Member Artist
​Hathaway has played with clay since the late 60’s before the birth of her first child. She started the ceramics program at the boarding school where she and her family lived, has taught the Advanced Placement Art
History course and various other art classes at schools where they worked. In 1983 she was fortunate enough to join The Parsons School of Design Program in Japan in ceramics. That experience changed her outlook on just about everything. She and her husband split their time between Vero and their aged farm on the Maine coast, replacing manatees with moose. Having seen Vero change enormously since coming as a baby, she looks forward to the bright future of this unique community gem, Indian River Clay.